Hey guys! I’m back with more T-shirt news! :) I’m not sure if you know him, but there is this Ukrainian writer Dima Hajduk who writes hilarious short stories “Rastaman Tales” (as well as Indian and other folk-related tales). The cool thing is he also produces audio-books (sorry, only in Russian as far as I know) with him reading the tales with great soundtracks. The first time I’ve heard his audio-creations I was totally in love with them. It happened in the early 2000, I’m not sure when exactly. Rastaman Mousey tale was one of the first I’ve heard.

Since that time I wanted to make illustrations for Dima’s tales. This intention popped up from time to time but I never took action. Till few weeks ago when I’ve contacted Dima on Facebook and he told me he will be happy to promote my T-shirts when they are ready. First I wanted to start with an Indian folk character Betal, but Dima said the Green Red-eyed Mousey is the most loved character by his fans.

Working on this T-shirt design

Long story short there was this Rastaman Mousey who was eating rastaman’s snacks and he could not catch it ’cause it was hiding in the wall behind the closet. I’ve made few versions of the future character’s head with different attitudes. Five of those where sent to Dima and he has picked one. 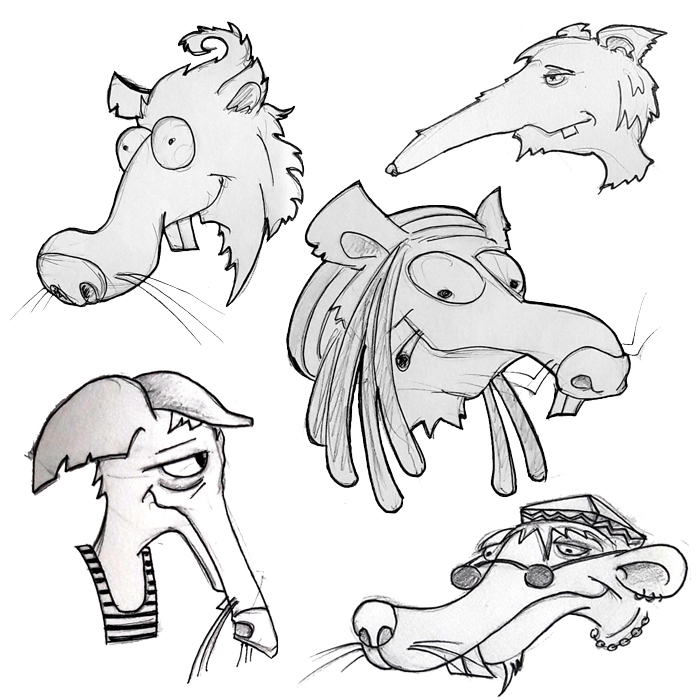 I wanted to depict the moment when the Rastaman Mousey high on THC and freaked out is running from totally wasted rastamen. So the next thing was figuring out the proportions of the body and the pose. I wanted the composition to be vertical so it will cover a big portion of the T-shirt. Making the head look to the side while having kind of front view of the body took me a while to figure out. 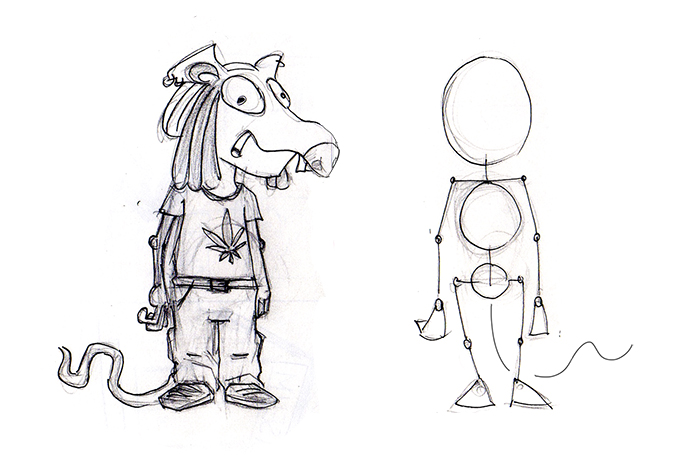 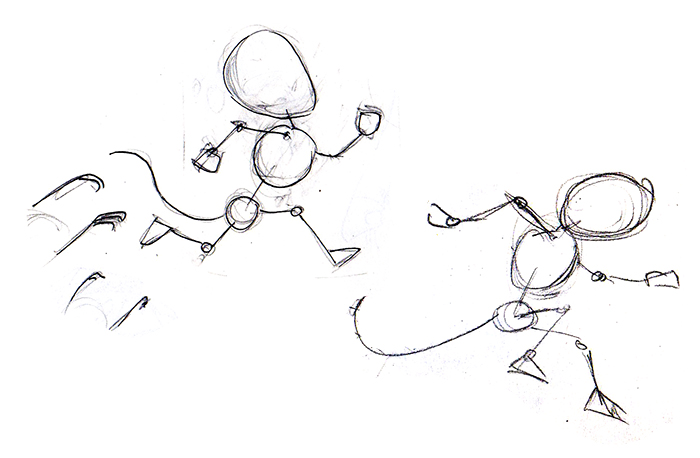 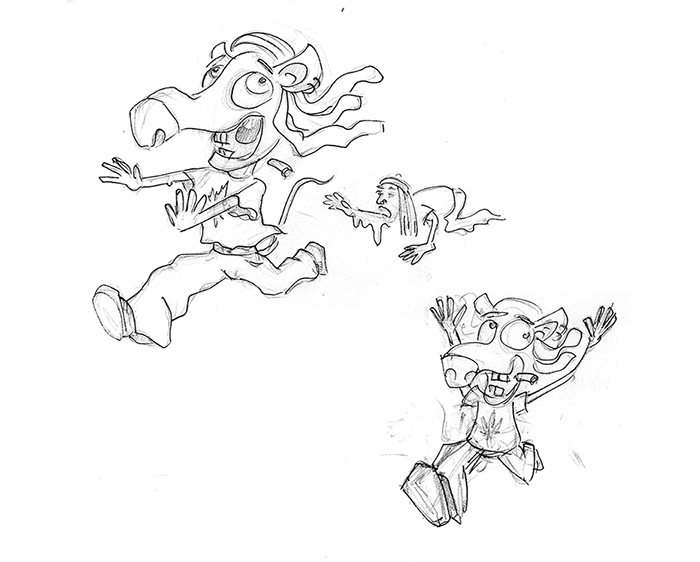 When the posture was clear I’ve made the final detailed sketch with pencil and liners. 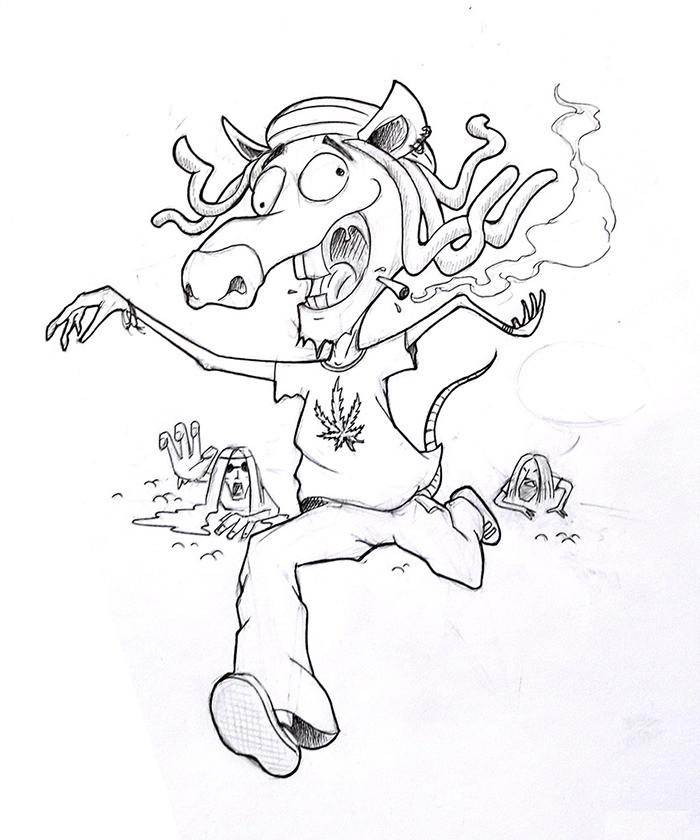 And here is the digital version. Dima seems to like it and I hope his fans will too! :) 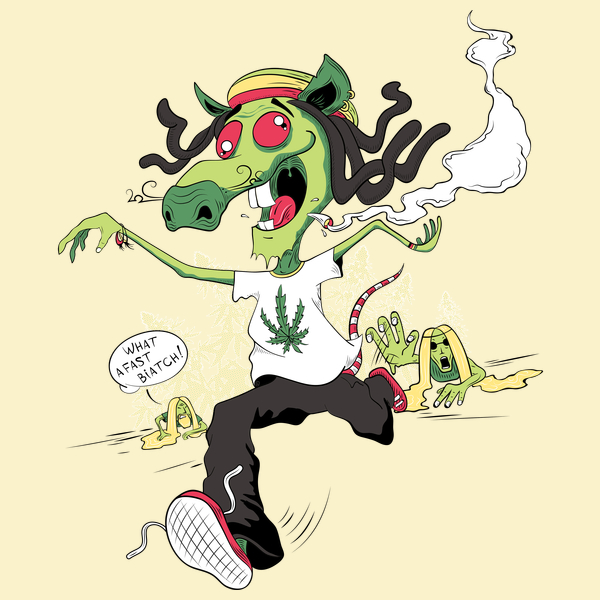 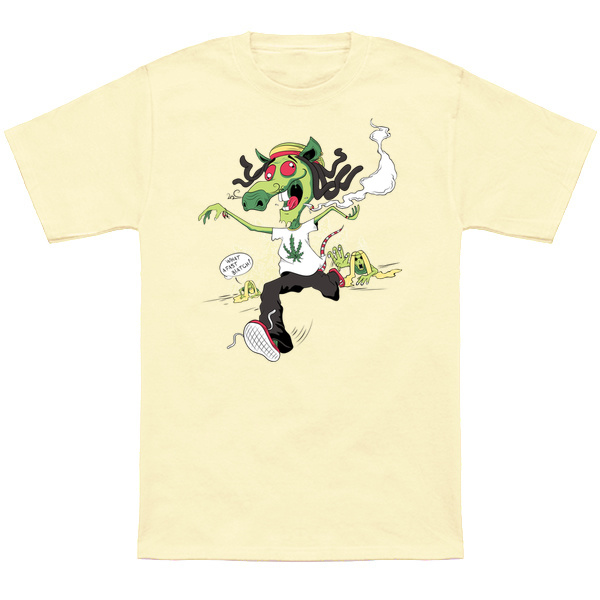 If you like this design you can buy T-shirts with it. The T-shirts I’m using are 100% cotton and the print is direct to garment. The price is $30 + you get free international shipping!

I would definitely like to make more T-shirt designs based on Rastaman Tales. Dima Hajduk has so many characters that are worth working with. Besides I’ve listened to his audio-tales so many times that it seams very natural to reflect my perception of his art toward you guys. I can not promise but I will be happy to make a new design at least every two months. I’ve even got some visions already but I won’t tell you any details now :). So stay tuned and order my new T-shirts!